A memoir by Wendy Stuart Kaplan 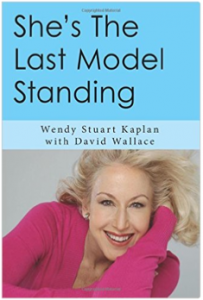 Dubbed by her friends “the Kathy Griffin of fashion”, Wendy’s hilarious, occasionally poignant story of how she became – and has remained for 30 years – one of the most successful “fit” models in the country (that size 8 you’re wearing might very well be based on Wendy Stuart Kaplan’s figure), is told with a Griffin-esque sense of humor untarnished by malice. From studying voodoo in Nigeria through years of taking mind-numbing jobs just to pay the rent, to her success in the present day where she can say of the women’s underwear sold at Wal-Mart, modeled on her size eight body, “I cover the asses of the masses.”

She’s the Last Model Standing is an “only-in-New-York” tale and an addictive page-turner. Wendy’s humor, intelligence and unique analysis of the fashion/entertainment industry make this memoir a true stand-out in the field.

Available in Kindle and hardcover at Amazon.com.